For me, writing relieves stress and is therapeutic. It also makes me feel fulfilled and joyous. That is for most days! Then there are days when I keep staring at the blank page.

I try to get help by using writing prompts or pursuing writing exercises. However, sometimes all you need are the words of great authors and thinkers.

If you’re also suffering from writer’s block, then here are few powerful writing quotes for inspiration.

1. “The first draft is you telling yourself the story.” -Terry Pratchett

2. “If there’s a book that you want to read, but it hasn’t been written yet, then you must write it.” -Toni Morrison

3. “There is nothing to writing. All you do is sit down at a typewriter and bleed.” -Ernest Hemingway

4. “We write to taste life twice, in the moment and in retrospect.” -Anaïs Nin

6. “One day I will find the right words, and they will be simple.” -Jack Kerouac

7. “A writer is someone for whom writing is more difficult than it is for other people.” –Thomas Mann 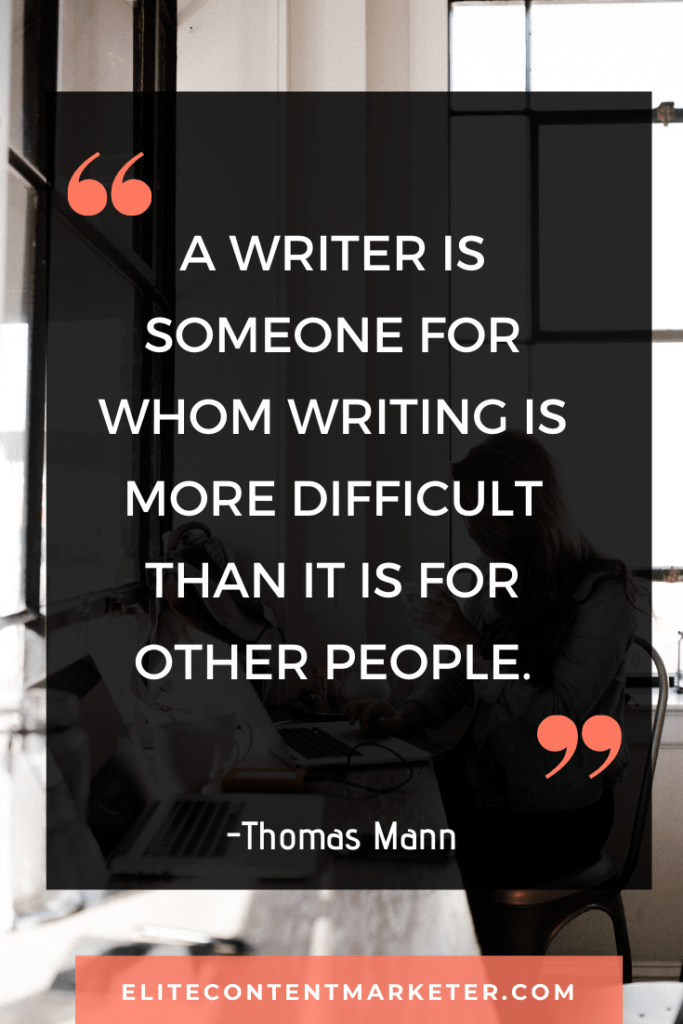 8. “Serious writers write, inspired or not. Over time they discover that routine is a better friend than inspiration.” -Ralph Keyes

9. “You can fix anything but a blank page.” -Nora Roberts

10. “If my doctor told me I had only six minutes to live, I wouldn’t brood. I’d type a little faster.” -Isaac Asimov

11. “If you wait for inspiration to write you’re not a writer, you’re a waiter.” –Dan Poynter

12. “A professional writer is an amateur that didn’t quit.” -Richard Bach

13. “How vain it is to sit down to write when you have not stood up to live.” -Henry David Thoreau

15. “You can always edit a bad page. You can’t edit a blank page.” -Jodi Picoult

17. “Lock up your libraries if you like; but there is no gate, no lock, no bolt that you can set upon the freedom of my mind.” -Virginia Woolf

18. “When I sit down to write a book, I do not say to myself, ‘I am going to produce a work of art.’ I write it because there is some lie that I want to expose, some fact to which I want to draw attention, and my initial concern is to get a hearing.” -George Orwell

20. “I write to discover what I know.” -Flannery O’Connor

21. “Step into a scene and let it drip from your fingertips.” –M J Bush

23. “The road to hell is paved with adverbs.” -Stephen King

26. “After nourishment, shelter, and companionship, stories are the thing we need most in the world.” -Philip Pullman

27. “The most beautiful things are those that madness prompts and reason writes.” -Andre Gide 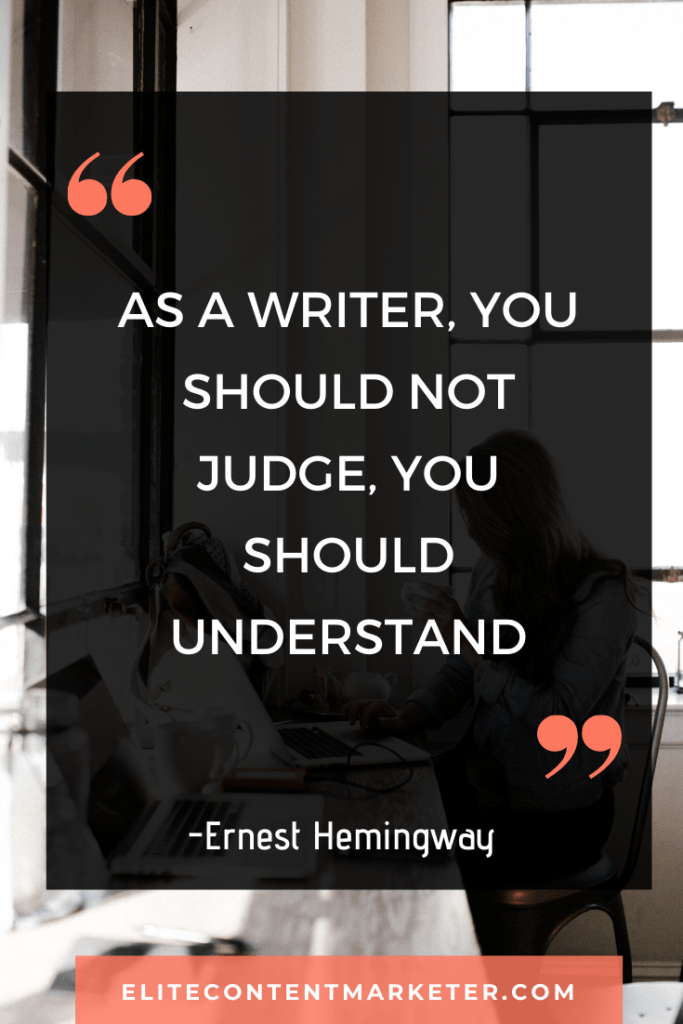 29. “Writing is a job, a talent, but it’s also the place to go in your head. It is the imaginary friend you drink your tea with in the afternoon.” -Ann Patchett

30. “Always be a poet, even in prose.” -Charles Baudelaire

32. “A book is simply the container of an idea—like a bottle; what is inside the book is what matters.” -Angela Carter

33. “Description begins in the writer’s imagination, but should finish in the reader’s.” -Stephen King

34. “You must stay drunk on writing so reality cannot destroy you.” -Ray Bradbury

35. “Be courageous and try to write in a way that scares you a little.” –Holley Gerth

37. “The most valuable of all talents is that of never using two words when one will do.” -Thomas Jefferson

39. “The secret of good writing is telling the truth.” -Gordon Lish

40. “Writing should be the settlement of dew on the leaf.” -Ralph Waldo Emerson

42. “A good writer possesses not only his own spirit but also the spirit of his friends.” –Friedrich Nietzsche

43. “To defend what you’ve written is a sign that you are alive.” -William Zinsser

44. “Read, read, read. Read everything — trash, classics, good and bad, and see how they do it. Just like a carpenter who works as an apprentice and studies the master. Read! You’ll absorb it. Then write. If it’s good, you’ll find out. If it’s not, throw it out of the window.” -William Faulkner

45. “Write. Rewrite. When not writing or rewriting, read. I know of no shortcuts.” -Larry L. King

46. “All good writing is swimming under water and holding your breath.” -F. Scott Fitzgerald

48. “A non-writing writer is a monster courting insanity.” –Franz Kafka

49. “When writing a novel a writer should create living people; people not characters. A character is a caricature”. –Ernest Hemingway

50. “A writer, I think, is someone who pays attention to the world.” –Susan Sontag

51. “A great writer reveals the truth even when he or she does not wish to.” –Tom Bissell

52. “Writing well means never having to say, “I guess you had to be there.” –Jef Mallett

54. “Don’t forget— no one else sees the world the way you do, so no one else can tell the stories you have to tell.” –Charles de Lint 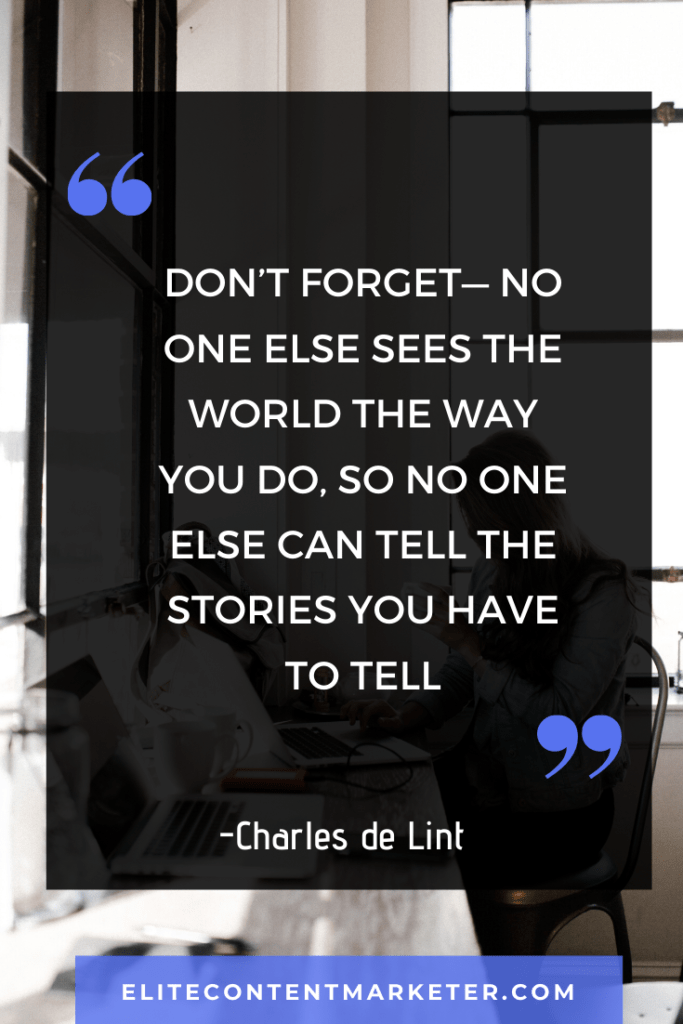 56. “I always tell audiences when I talk about writing: Writing isn’t something I do; writing is something that I am. I am writing – it’s just an expression of me”. –Wayne Dyer

57. “I have never started a poem yet whose end I knew. Writing a poem is discovering.” –Robert Frost

58. “The writer is by nature a dreamer— a conscious dreamer.” –Carson McCullers

59. “The universe is made of stories, not of atoms. –Muriel Rukeyser

61. “The heart and soul of good writing is research; you should write not what you know but what you can find out about”. –Robert J. Sawyer

62. “Easy reading is damn hard writing. But if it’s right, it’s easy. It’s the other way round, too. If it’s slovenly written, then it’s hard to read. It doesn’t give the reader what the careful writer can give the reader”. –Maya Angelou

63. “Once writing has become your major vice and greatest pleasure, only death can stop it”. –Ernest Hemingway

64. “Writing is an exploration. You start from nothing and learn as you go.” –E. L. Doctorow

65. “The only writer to whom you should compare yourself is the writer you were yesterday.” –David Schlosser

Do You Care To Share Your Favorite Writing Quote?

Hope you liked these inspirational writing quotes. You can also check out creativity quotes for more motivation.

Also, don’t forget to share your favorite quotes about writing with me in the comments below.

LET'S MEET IN YOUR INBOX 😃

How To Start A Blog: A Writer’s Guide

While blogging requires writing as an essential skill, most traditional authors (with a literature background) have a tricky relationship with

5 Free Podcast Hosting Platforms You Can Trust To Not Vanish

Are you contemplating creating your own show that people can tune in to and listen to your voice? If so,

Whether you’re looking for a podcast host for your new show, or considering switching, there are tons of options. Further

Webinars are invaluable to a creator — they enhance your connection with your audience, let you engage with your prospects,

So you want to take the leap into freelance writing?Hearty congratulations on making the decision! Here’s how your life is

Want to build a sustainable business from your craft?

Then enter your email and choose the creative entrepreneurship journey you want to embark on below!